Ministry of Economy of Ukraine

The version for the visually impaired
Українською In English 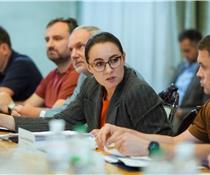 Time for “Yanukovych’s Gendarme”: Government Did a Step towards Recovery of Assets of Former Minister of Internal Affairs Zakharchenko
05.09.2022 | 15:40 | Section for Public and Mass Media Relations

The Cabinet of Ministers of Ukraine adopted the order allowing to recover for the benefit of the state the property and assets of former Minister of Internal Affairs during Yanukovych’s times – Vitalii Zakharchenko.

The relevant document approved by the Government on September 2 proposes to submit the issue of application of sanctions against V.Yu. Zakharchenko in the form of blocking the assets according to changes in the Law of Ukraine “On Sanctions”, which entered into force on 24.05.2022, to the National Security and Defense Council of Ukraine for review.

The issue of necessity to block assets of sanctioned persons, according to the applicable law, was updated during the first meeting of the Inter-Departmental Working Group on Implementation of State Sanctions Policy led by the First Vice Prime Minister of Ukraine – Minister of Economy Yulia Svyrydenko.

“The task currently faced by us is to make the sanctions policy of Ukraine as efficient as possible. Persons subject to the Law of Ukraine “On Sanctions” – enemies of our state who started, contribute to or support the aggression – must painfully feel the effects of their actions. The work continues. The Ukrainians will soon have good news, from the Inter-Departmental Working Group and the Government, which cannot be said about some representatives of the aggressor country”, said Yulia Svyrydenko.

Sanctions against Vitalii Zakharchenko, in particular in the form of blocking the assets, temporary restriction of the right to use and dispose of owned by him property, were approved by the decision of the National Security and Defense Council of Ukraine dated February 26, 2021 in accordance with then applicable legislation. However, changes in sanctions legislation that entered into force in May 2022 contain more powerful and effective tools for application of sanctions. In particular, blocking the assets in a new wording of the Law of Ukraine “On Sanctions” allows the Ministry of Justice to turn to the High Anti-Corruption Court with a submission for recovery of assets. Blocking the assets may also extend not only to a sanctioned person, but also to related persons.

Recall that at the meeting which took place on September 2, the Cabinet of Ministers of Ukraine approved a number of others decisions regarding sanctions. Thus, the Government offered the National Security and Defense Council of Ukraine to consider application of sanctions against Russian state-owned corporation Rosatom and more than 700 related entities (about 350 legal entities and about 350 individuals).

The proposed list included, in particular, managers of Russian state-owned corporation Rosatom and its subsidiaries taking direct part in the adoption of decisions and implementation of nuclear terrorism acts in the territory of Ukraine.

The Government also suggested that the National Security and Defense Council of Ukraine considers application of sanctions against 132 individuals and 172 legal entities of the Russian Federation and the Republic of Belarus, who contributed to a large-scale armed aggression of the Russian Federation against Ukraine, participate in the organization of “schemes” to circumvent sanctions applied by the USA and the EU, create threats to national interests and national safety of Ukraine. The list included 132 individuals and 179 legal entities.

The second meeting of the Inter-Departmental Working Group took place in the evening of September 2, where new sanctions steps were discussed. New sanctions will be proposed to the Government in the near future, and then to the National Security and Defense Council of Ukraine. And they will enter into force after enactment of the decision of the National Security and Defense Councils of Ukraine by the Decree of the President of Ukraine.