“War risk insurance should be extended to both foreign and Ukrainian investors,” – Yuliia Svyrydenko at KIEF 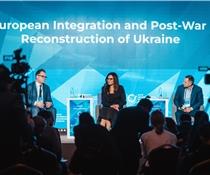 The key areas of the Government’s work in the economic sphere today are the stabilization of the economy and the laying of the foundations for the reconstruction of Ukraine and the post-war development of the economy. This was stated by First Deputy Prime Minister – Minister of Economy of Ukraine Yuliia Svyrydenko during her speech at the Kyiv International Economic Forum (KIEF) on 17 November 2022.

As the First Deputy Prime Minister – Minister of Economy emphasized, the Government is not waiting for the end of the war to take steps to ensure successful reconstruction. Work on raising investment, provision of risk insurance, creation of appropriate regulatory framework, etc. is already in progress.

“We all understand: reconstruction will be through the architecture and institutions that we have to create now. It will be through the Recovery Fund in the first place. Our international partners will provide funds for the implementation of social and road infrastructure projects. Secondly, today we are talking about the structuring of the private investment fund where private investors will invest and, in this way, finance private institutions that will participate in the recovery,” said Yuliia Svyrydenko.

As the First Deputy Prime Minister emphasized, war risk insurance remains a very important issue from the standpoint of attracting investment. An agreement on military risk insurance in the amount of $30 million has already been reached with MIGA, which part of the World Bank group. Having purchased an insurance policy, investors will be able to receive up to 90% compensation of their potential losses. Currently, we are working on two projects: one is a foreign investment; the second is a purely Ukrainian project.

As Yuliia Svyrydenko emphasized, when negotiating with partners regarding insurance, Ukraine wants projects to be extended to both foreign and Ukrainian investors

Next year, Ukraine plans to mobilize up to $1 billion for the project with MIGA. We are also negotiating with DFC, which is ready to lend Ukrainian businesses up to $1 billion. Support is possible both through direct lending and borrower’s credit risk insurance.

In addition, the Government is holding relevant negotiations with the export credit agencies of the G7 countries, as noted by the First Deputy Prime Minister.

According to Yuliia Svyrydenko, solving the insurance issue will intensify the investment raising process. Moreover, even today investors’ interest in Ukraine is significant: more than 400 investment requests have already been registered on the Advantage Ukraine platform both from potential investors and project proposals in various industries.

Speaking about the post-war economy, Yuliia Svyrydenko emphasized that receiving investment and capital investment in industry is considered one of the most important components of the future “economic miracle”. But not the only one: for success, you need to take many other steps. In particular:

It is extremely important to ensure the rule of law and affirm the export model of growth. Ukraine will focus on the development of industries that will give the greatest effect in this area:

“Without waiting for the war to end, we need to understand in the public dialogue what the economic strategy of post-war Ukraine will be. But, having reached an agreement, take all the necessary steps. In my opinion, it is a competitive tax system that should make Ukraine attractive. Fast logistics – the goods must reach any corner of Europe within 72 hours. We have to develop the defence complex, military tech, agricultural processing and metallurgy but also on the basis of processing.

Ukraine must be granted permanent access to the markets of Europe and the USA. Because raw materials are one story, and processing products have always been different story, tariff and other barriers worked here. Therefore, our position is that the EU should extend the Agreement on the abolition of customs duties for Ukrainian goods. And last week, we raised the issue of extending the validity of a separate agreement on steel in the USA,” Yuliia Svyrydenko noted.

The Kyiv International Economic Forum is one of the largest international forums in Eastern Europe, which brings together representatives of business, government and society to discuss key economic issues and global trends. KIEF was launched in 2014. The Forum defines its mission as building a successful future by uniting people who have the desire and possibilities to change the world for the better.