“Ukraine has a full moral right to reparations from the russian federation,” – Yuliia Svyrydenko at KIEF 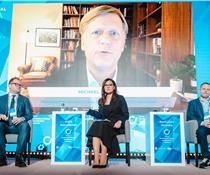 The international community must constantly increase the sanctions pressure on the terrorist state, and RUSSIA must compensate for the damage caused by the aggressor to Ukraine. This was emphasized by the participants of the Kyiv International Economic Forum (KIEF), which took place in the capital of Ukraine on 17 November 2022.

“The Russian economy will drop by 4.5-4.6% by the end of the year according to forecasts. The Ukrainian – without taking into account the missile strikes in October and November – already by 30%. And, probably, due to the attacks on the energy infrastructure, the macro forecast will have to be adjusted until the end of the year. That is why we state that the sanctions are not working as quickly and effectively as they should be, they need to be strengthened,” said First Deputy Prime Minister – Minister of Economy of Ukraine Yuliia Svyrydenko.

In turn, Michael McFaul, Professor of Political Science at Stanford University, former U.S. Ambassador to the Russia, noted that Ukraine’s allies are doing everything possible to reduce russia’s resources to continue the invasion of Ukraine.

“Sanctions control over the export of technology has a devastating effect on the russian economy and it must be continued and strengthened. The other elements of sanctions work in the same way: individual sanctions, energy sanctions and financial sanctions. And I know they are working when every day I get an e-mail from a russian on the sanctions list asking me how he can get off the list…

But at the same time, in my opinion, the West is not doing enough. Every day, when the russian army tries to occupy Ukraine, there should be new sanctions. Every day. It is like parking fines: if you park your car incorrectly, you will be fined right away. There was a terrible attack on your country Yesterday – 93 rockets. Why was there no reaction in the form of sanctions today? Not in a week, not in a month, not in three months, it must be done today,” Michael McFaul said.

Speaking about the prospects of Ukraine receiving reparations from russia, the panelists expressed their believes that Ukraine has the right to receive them. And the recent decision of the UN General Assembly laid solid legal foundations for further work in this area.

“Can we expect the frozen russian assets to be used for the recovery of the Ukrainian economy? We have a full moral right to this,” Yuliia Svyrydenko said.

In his turn, Rostyslav Shurma, Deputy Head of the Office of the President of Ukraine, emphasized that the Ukrainian government has a clear vision of what needs to be done in the future.

“It is necessary to force the mechanism of confiscation of assets, including private assets. We have no such mechanism today. But there is an understanding of what and how we will do. Both from the point of view of international treaties, namely bilateral and multilateral, and adaptations of national legislations, which will provide for the removal of sovereign immunity for sovereign assets, which is very important in international financial relations,” Rostyslav Shurma noted.