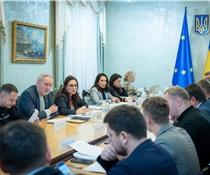 On September 30, the National Security and Defense Council of Ukraine made a decision to impose another package of sanctions on individuals and legal entities.

Based on the results of the meeting of the National Security and Defense Council of Ukraine, President of Ukraine Volodymyr Zelenskyy emphasized that sanctions will be imposed “on significant individuals and legal entities of Russia who either did not find courage to speak out in defense of humanity and international law, or are somehow related to aggressive steps against Ukraine and community of democratic nations”.

The packages of sanctions were previously reviewed by the Interdepartmental Working Group on Implementation of State Sanctions Policy (see photo above – the IDWG meeting on 30.09.2022) chaired by the First Vice Prime Minister of Ukraine – Minister of Economy Yuliia Svyrydenko and submitted by the Security Service of Ukraine to the National Security and Defense Council of Ukraine.

“Persons related to an aggressive war against Ukraine or supporting Putin’s regime must clearly understand that punishment will be inevitable. We will respond to every action directed against Ukraine and the Ukrainian people. In particular, by imposing sanctions as a powerful tool of economic pressure. The potential for strengthening sanctions is far from exhausted, which was discussed, in particular, during the recent meeting with the ministers of trade from G7 countries in Germany. Thus, we will continue to synchronize sanctioning actions with our international partners,” noted chairman of the IDWG Yuliia Svyrydenko.

More than 3,600 individuals and legal entities were included in the list approved by the National Security and Defense Council of Ukraine. In particular, the list includes the following categories of people:

Sanctions have also been imposed on foreign citizens – so-called “international observers” who participated in illegal referendums in the temporarily occupied territories of Ukraine.

Sanctions have also been imposed on key system-forming companies, banks, enterprises in the defense industry, mining, energy, communication, logistics and other sectors.

Reference. Interdepartmental Working Group (IDWG) on Implementation of State Sanctions Policy was created by the decision of the Cabinet of Ministers dated August 30, 2022. Its members include representatives of various ministries, the Office of the President of Ukraine, the National Security and Defense Council of Ukraine, the Security Service of Ukraine, law enforcement, intelligence and other public authorities and agencies. In a quite short time, the activity of sanctioning Interdepartmental Working Group reached the systemic level. The purpose of its work is concrete practical steps, efficiency and effectiveness in the implementation of state sanctions policy. The participants of the IDWG assure that sanctions pressure on the Russian Federation and its accomplices will only increase in the future.