“We Must Do Everything to Ensure Ukraine’s Transition from a Transit to a Developing Economy in One Decade,” Said Yuliia Svyrydenko at the YES Forum on the Country’s Future 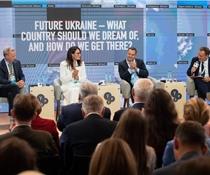 The First Vice Prime Minister – Minister of Economy of Ukraine participated in a panel discussion at the annual Yalta European Strategy forum, where together with reputable economists, politicians and businessmen from around the world she discussed what Ukraine of the future should be.

On 9-10 September, Kyiv hosted the annual Yalta European Strategy (YES) forum in which more than 400 leading politicians, diplomats, businessmen and experts from more than 20 countries of the world took part. The President and Prime Minister of Ukraine spoke there.

This year’s conference was devoted to the efforts of our state to protect sovereignty, independence and freedom. One of the panel discussions was covered the topic “Ukraine of the future – what country to dream about, and how will we get there?”

Yuliia Svyrydenko, First Vice Prime Minister – Minister of Economy of Ukraine, spoke as one of the speakers during the discussion about Ukraine of the future, which we have to build after the war. According to her, we need to make a triple jump in the economy – from a transitional (transit) to a developing economy. In actual numbers, this is a jump from $4.5 thousand GDP per capita to more than $12 thousand per year.

And in order to achieve these ambitious growth goals, a plan has been developed, which the minister announced at the forum:

An active movement has already begun in many of these areas despite the war.

“There is no doubt that the tasks we have are difficult. However, they are achievable,” assured Yuliia Svyrydenko. “Today the whole world is amazed by the stability and strength of the Ukrainian army. I believe that in the foreseeable future, not only the army but also the economy of Ukraine will surprise the world with its stability and strength. We must do everything to ensure Ukraine’s transition from a transit to a developing economy in one decade.”

In addition to the First Vice Prime Minister, other well-known economists, businessmen and politicians took part in the panel discussion:

The panel was moderated by Niall Ferguson, a well-known historian and writer, Harvard Professor, Senior Researcher at Oxford and Stanford universities.

Foreign colleagues called the plan of the Ministry of Economy promising and effective, and also emphasized that our country was already one of the most progressive in the field of digitalization. And it is in innovations and new technologies that the future of Ukraine lies.